The security of the UAE’s younger generation was top of the agenda at a recent meeting held between the Ministry of Education (MoE) and the Child Safety Campaign, an initiative from the Sharjah-based Supreme Council for Family Affairs (SCFA), to discuss the campaign’s achievements in its second edition, as well as to boost its strategy formulated to ensure the safety of Sharjah’s children and young adults.

The meeting explored the working relationship between the MoE and the campaign in its current third edition, and was attended by Her Excellency Sheikha Khulood Saqer Al Qassimi, The Assistant Undersecretary of Inspection Sector in MoE ; and Mona Motawe, Human Resources Advisor at the Office of the MoE Undersecretary for Inspection & Support Services, Hanadi Saleh Al Yafei, Department Director at SCFA and Head of the Organising Committee of Child Safety Campaign; Nahla Hamdan, Manager of Initiatives and Activities Department at SCFA and Moza Al Khayal, Head of Strategy and Business Development for Sharjah Ladies Club.

During the meeting, the campaign’s representatives extended their thanks to the MoE for contributing to the success of its second edition, which was held under the title ‘Your Child Is Your Responsibility.’ They submitted the final report highlighting the achievements of the second edition, and emphasised the importance of organising ongoing awareness workshops on child harassment and abuse in schools and to install surveillance cameras in school buses and facilities. CSC representatives also screened a short promotional film, which was broadcast on satellite channels, to raise awareness about how to protect children from abuse.

“The objectives of the Child Safety Campaign are one of the foundations that the MoE is solidifying within an integrated system, which forms part of the Ministry’s strategic plans for workshops and initiatives throughout the year. The MoE is committed to boosting collaboration with different initiatives that enhance child safety and security at schools. Its vision is to support schools as educational platforms that contribute effectively to creating a successful generation armed with knowledge and is physically and psychologically safe,” said Sheikha Khulood Saqer Al Qassimi, The Assistant Undersecretary of Inspection Sector in MoE. 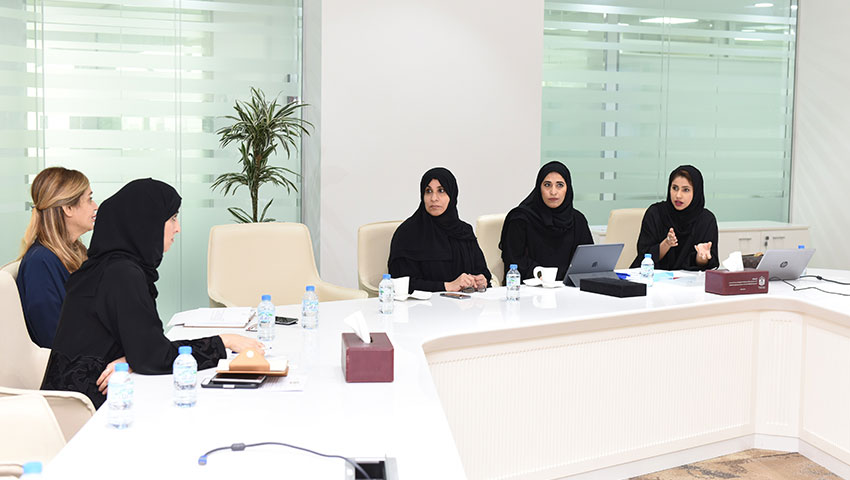 “The Child Safety Campaign is committed to boosting partnerships with government and private organisations in the fields of education and childcare. Our work stems from the vision of His Highness Sheikh Dr Sultan bin Muhammad Al Qasimi, Member of the Supreme Council and Ruler of Sharjah, and His Wife, Her Highness Sheikha Jawaher bint Mohammed Al Qasimi, who have long emphasised the importance of collaboration and solidarity to achieve our common goals. The campaign’s cooperation with the MoE is one of the best examples of such a partnership, given what the Ministry represents on a governmental level and what it can offer the new generations in the educational sphere. It will enable the campaign to hit its targets smoothly,” said Hanadi Saleh Al Yafei.

“The collaboration between the campaign and the Ministry of Education underlines the importance of what the campaign is addressing on the one hand, and the pivotal role played by the MoE to enhance a safe child-friendly environment at schools, as well as support the school environment to create knowledge-based generations who are empowered physically, psychologically and intellectually,” she added.

A significant part of the meeting between the MoE and the Child Safety Campaign saw the two sides exploring ways to enhance joint collaboration in conjunction with the launch of the new edition of the campaign, which is being held under the slogan ‘Child Safety in Cyberspace.’ The third edition aims to raise awareness about the importance of keeping children safe online and to promote optimal uses of social media websites. The campaign comes in the wake of the proliferation of and easy access to websites and the increased presence of children in cyberspace from a young age.

The Child Safety Campaign is an initiative launched by SCFA under the directives of the wife of His Highness the Ruler of Sharjah, Her Highness Sheikha Jawaher bint Mohammed Al Qasimi, Chairperson of SCFA. It seeks to promote awareness about children’s care, safety and social wellbeing in order to ensure they are physically and psychologically healthy in a happy and stable family environment.