The Child Safety Campaign (CSC), a subsidiary of the Supreme Council for Family Affairs in Sharjah (SCFA), has begun to implement the first phase of two studies that seek to measure parents’ awareness on children’s vehicle safety and cyber security, in cooperation with the Sharjah Department of Statistics and Community Development (DSCD).

The two surveys come in line with the campaign’s dedication to promote awareness about children’s physical and psychological safety and security. The survey results will offer a fully integrated database to measure the indicators of children’s safety in vehicles and internet usage, as well as identify common safety measures that parents take to protects their kids.

The first survey seeks to measure parents’ awareness about traffic regulation and laws on car seats and seatbelts, and whether parents conform to those laws. It also promotes awareness on the fundamentals of road safety, and the Federal Traffic Law amendments in 2016 that made it mandatory for toddlers aged up to 6 years to use car seats, and for children aged 7-10 years to sit in the back seat of the vehicle.

The second survey seeks to measure parents’ awareness about the cyber security of their kids, and their literacy on programmes that are designed to ensure children’s safety when they are using the internet, especially social media platforms. It also aims to help parents use the right methods to monitor their children’s access to the internet, and enhance the safety of their kids through teaching them to avoid communicating with strangers, not to share personal information neither about themselves nor about their parents, the measures that they can take when they come across improper content, and how to protect themselves against cyber-attacks. 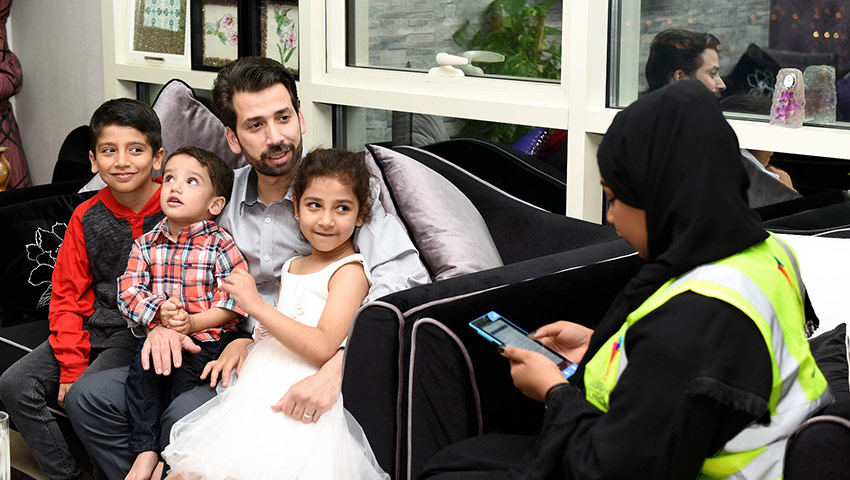 The research team working on the studies is anticipated to conduct the surveys for an estimated 12,344 families in Sharjah over the course of two weeks.

Hanadi Saleh Al Yafei, Department Director of SCFA and Head of the Organising Committee of CSC, said: “Under the auspices of Her Highness Sheikha Jawaher bint Muhammad Al Qasimi, wife of His Highness the Ruler of Sharjah and Chairperson of SCFA, the CSC is conducting these two surveys for the very first time in line with our dedication to measuring awareness indicators about children’s traffic safety and cyber security among parents, who have already shown great interest in the surveys and responded positively to them through cooperating with our team of researchers.”

“These surveys are important because they provide a valuable source of information, identifying wrong practices in vehicles on the one hand, and establishing a database that can be reviewed and updated according to subsequent surveys conducted in the future which can be used and deployed as special reference to many state departments and child-care and protection institutions in Sharjah and UAE,” she added.

“These efforts align with the campaign’s objectives to enhance joint institutional action in the field of child protection. Our next step would be to expand the scope of the studies to all emirates in UAE in coordination with federal institutions,” she underscored.

Al Yafei pointed out that launching the studies is important in view of families’ dependence on private vehicles, and it is crucial for them to conform with traffic regulations to ensure the safety of their children while travelling. Along with rising number of children using the internet and social media websites in particular, it is important to provide both children and parents with protection guidelines.