As an increasingly common and alarming crime, child abuse has far-reaching effects for both the children and the communities in which they live. The consequences can bring a lifetime of devastation and often affects upbringing, education and behaviour with others.

To raise awareness about this phenomenon, and following the directives of the Wife of His Highness Ruler of Sharjah, Her Highness Sheikha Jawaher bint Mohammed Al Qasimi, Chairperson of the Supreme Council for Family Affairs (SCFA), the ‘Child Safety Campaign’, an initiative of the SCFA, has devoted the second phase of its campaign to address violations and abuses committed against children, under the slogan ‘Children’s Safety is your Responsibility’.

The second phase of the campaign focused on raising awareness of all members of society to protect children from any form of abuse. It promoted the respect and privacy of children’s bodies, protection against abuse, enhancing social and communication skills and the role of institutions and organisations in achieving child safety and security.

Hanadi Saleh Al Yafei, Head of the Child Safety Campaign Organising Committee, said: “Her Highness Sheikha Jawaher bint Mohammed Al Qasimi, has established the framework to make Sharjah a child-friendly and family-friendly city. Following her directives and vision for the emirate, we have dedicated the second phase of the Child Safety Campaign, which seeks to ensure children’s physical and emotional health, to shed light on child abuse. The campaign covered all cities and areas in the Emirate of Sharjah including the Central and Eastern regions. It targeted children and young adults aged 4-18 years, parents, and school staff including social workers, nurses, and physical education instructors.” 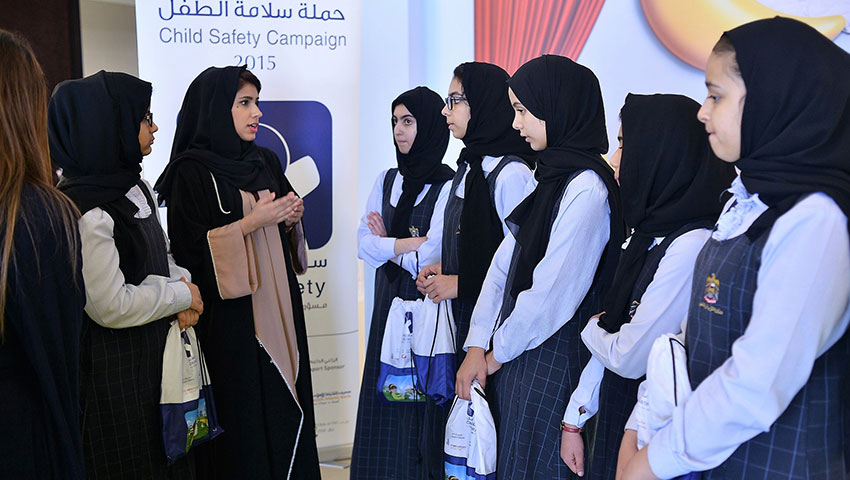 Before launching the campaign, the organising committee conducted a preliminary survey on 6,126 students, to measure their awareness about the different types of abuse. Based on those results, a study was prepared to guide the Campaign’s progress and methods, considered the first of kind in the emirate to measure students’ awareness about the concept of child abuse.

Hanadi Saleh Al Yafei said the preliminary survey and subsequent study provided a precious source of information for all those concerned with child protection and sought to make recommendations and proposals to reduce the incidence of child abuse. Following the conclusion of the Child Safety Campaign, the organising committee conducted a secondary survey as an indicator of its effectiveness and success in reaching its targets.

A comparison of the survey results

Before the campaign began, 25.3% of students did not have any awareness about the concept of abuse at all, with students of non-Arab nationalities having the lowest awareness at a rate of only 3.4%. This rate increased significantly after the campaign to reach 93.3%.

The preliminary survey indicated that the most common forms of abuse against children included touching and looking at their private parts, verbal abuse, physical harassment, and abusers engaging indecent exposure to a child.

The results also suggested the most common places for abuse to occur included crowded places, public streets, schools, school buses and at home. Many of those questioned believed that abusers were most likely to be: strangers, drivers, schoolmates, relatives and finally, family members.  The study also showed that when abused, children are more likely to ask for help from their mothers, fathers, the police, teachers and then other reliable people. However, the results of the secondary survey indicated that children’s confidence within their families and teachers increased after the campaign was concluded, and children will respectively ask help from their mothers, fathers, teachers, other reliable people and finally the police.

Hanadi Saleh Al Yafei said: “The campaign focused mainly on students with 235 activities that targeted first, second, and third grade levels, as well as kindergarten and nursery students. The campaign provided 50 activities designed for parents, and four activities for students with disabilities. The remaining activities targeted physical education instructors, teachers and supervisors. The activities were carried out with the participation of 75 certified lecturers.”

Thousands of people benefited from the events which were attended by 18,384 parents, 12,674 students, 137 people with disabilities, 143 teaching staff and 148 physical education instructors. The total beneficiaries of the campaign reached 31,486 people.

The organising committee used a number of awareness methods, starting by distributing awareness kits that included the booklet entitled ‘I Know My Rights’, which explains to children the procedures to be followed in case they are subject to any type of abuse, in addition to a whistle, a notebook and other writing material. The campaign also distributed the book “How to Protect My Child from Abuse” to all parents and specialists who attended the workshops and events. A brief awareness video for children on how to react to child abuse was also produced; it airs daily on Sharjah TV.

By the end of the campaign, the organising committee announced its final results and recommendations. The results indicated that community awareness around child abuse and its dangers has significantly increased, as the campaign succeeded in raising awareness among children from 73.2% to 87.9%. It was successful in activating protection programmes designed for children and contributed to promoting all child protection hotlines across the UAE. The results also revealed some cases where children had suffered abuse; these were directed to the respective authorities for appropriate treatment and therapy.

The overall recommendations of the campaign were divided into sections and classified according to the relevant position and specialisation of the entities involved:

The first recommendation was to appoint a specialised working group to oversee planning, coordination, follow-up and developments related to child abuse. The second was to establish an office to review the activities and measure the progress of implementing the recommendations while seeking to activate strict laws on abuse. The third recommendation was to initiate a comprehensive strategy to increase awareness about child protection. This would span all sectors in the emirate, including full coordination between schools and educational institutions, specialised bodies and the SCFA.

Continue the campaign’s activities and events while shifting the focus to parents, bus assistants, bus drivers, class supervisors and people with disabilities; understand the laws related to child rights and protection, as well as publish all that is related to the question of child abuse; develop an integrated media plan to face abuse in a simple way that children can easily understand.

Recommendations for the educational system

Bind the Sharjah Educational Zone to constantly organise awareness workshops about child abuse; install surveillance cameras in school buses and in all school facilities, in addition to applying age-group segregation in school classes; include child rights protection laws in school regulations; increase the number of social workers and psychologists in schools, and activate their roles in child abuse cases, along with the role of parents; include child protection laws within school laws and regulations.

Recommendations for the Ministry of Interior

Focus on planning awareness programmes that target male students in public and private schools; conduct scientific studies on child abuse phenomenon to analyse its causes, consequences, and solutions; enact strict articles on legal punishment and appropriate penalties to anyone who commits any kind of abuse anywhere, and include and activate the law in school regulations; the Ministry of Interior should bind school buses to put a barrier between the driver and students with at least one supervisor in each school bus; organise a workshop that includes the Ministry of Justice, the Department of Social Services, the Ministry of Education, Sharjah Police Headquarters and Sharjah Islamic Affairs Department to discuss legal codes and disciplines related to child abuse and recommend the best practices to enact them in a unified manner.

Hanadi Saleh Al Yafei, Head of the Organising Committee of the Child Safety Campaign, and Department Director at the Supreme Council for Family Affairs, expressed her gratitude to all those who contributed to the campaign including students, teachers, volunteers, individuals and institutions, saying: “We thank everyone involved, including our strategic partners at the Sharjah Airport International Free Zone (SAIF Zone), Sharjah Islamic Bank, along with the participants from the Department of Social Services in Sharjah, Sharjah’s Community Police, Family Development Centres, Islamic Affairs Department, Sharjah Education Council, Dubai Foundation for Women and Children, Sharjah Media Arts for Youth and Children ‘Funn’, and ICDL.