The Child Safety Campaign, an initiative of the Supreme Council for Family Affairs (SCFA), launched the ‘Strap them Safe’ initiative yesterday (Tuesday), to raise awareness among parents on the importance of car safety for their children, through the use of seatbelts and car seats.

The new initiative was launched under the patronage and directives of Her Highness Sheikha Jawaher bint Mohammed Al Qasimi, wife of His Highness Ruler of Sharjah, and Chairperson of SCFA, in collaboration with Sharjah Police Headquarters, and FUNN, the Sharjah-based organisation dedicated to helping younger generations become engaged in media arts.

The initiative seeks to spread a clear and engaging message on the importance of complying with traffic laws and regulations in protecting children from the impact of possible traffic accidents. To spread its message, the campaign used special effects to paint children’s faces, showcasing injuries and bruises in a realistic way, making a large impact on drivers and passers-by.

Held on the University Road in Sharjah, the initiative saw the participation of a host of Sajaya Young Ladies of Sharjah, Sharjah Children Centres members, police officers from Sharjah Police General Headquarters and the Child Safety Campaign organisers. They distributed flyers and gift bags to drivers and explained the amendments to the traffic law, focusing on the types of car seats that each age group requires. 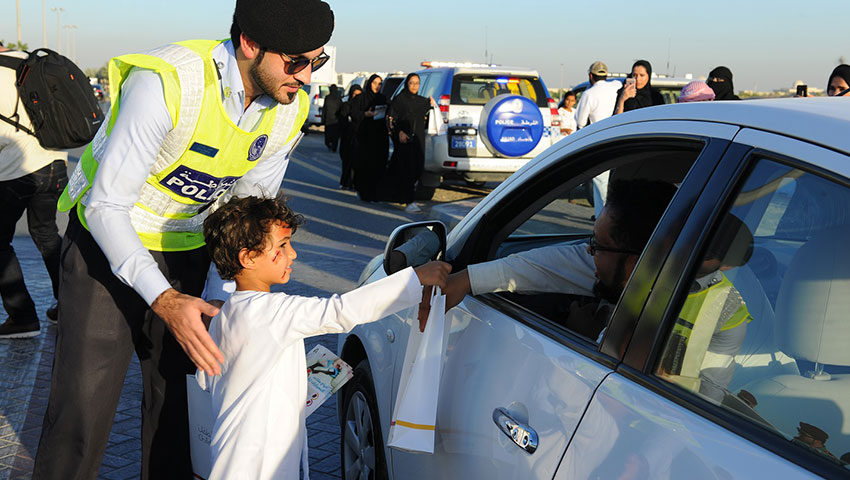 The initiative comes in preparation of federal executive entities implementing the amendments on a number of articles of the executive regulation list of the Federal Traffic Law approved by Lieutenant General His Highness Sheikh Saif bin Zayed Al Nahyan, Deputy Prime Minister and Minister of Interior.

Based on the amendments, all drivers and passengers must fasten their seatbelts and children under the age of four should be provided with car seats. Fines will be levied for failure to comply with the new legislation which will take effect on July 1, 2017.

“We have launched the ‘Strap them Safe’ initiative to raise awareness of the importance of providing children with special belt-positioning booster seats, ensuring their seatbelts are fastened and that they are in the back seat of the vehicle to reduce the risk of injuries in case of accidents. Through this initiative, we hope to promote collaboration on this vital safety message, on both a federal and local level,” said Hanadi Saleh Al Yafei, Department Director at SCFA and Head of the Organising Committee of the Child Safety Campaign.

“The initiative is in keeping with the directives of Her Highness Sheikha Jawaher bint Mohammed Al Qasimi, who has called for the implementation of federal traffic laws to ensure children’s safety in vehicles since the Campaign’s inception in 2011. The first edition of the Child Safety Campaign addressed the issue of providing children with car seats, and distributed more than 1,000 safety seats to parents in collaboration with various hospitals across Sharjah to provide the highest levels of safety to their new-born babies,” she added. 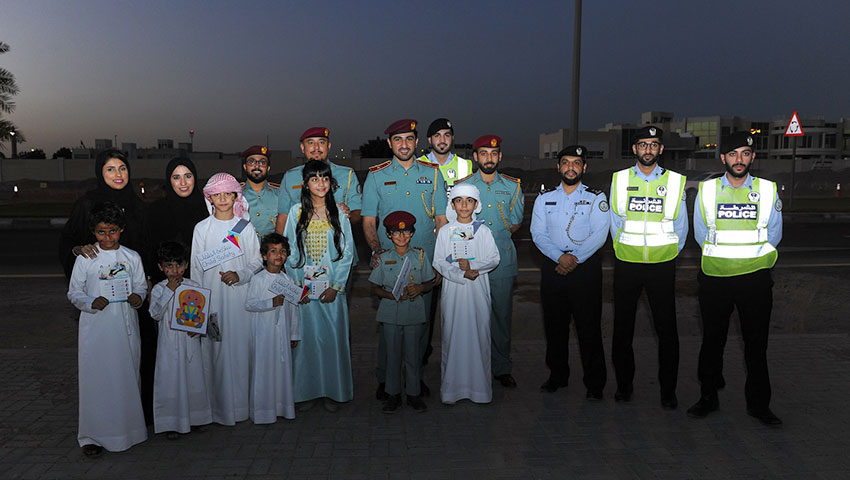 Brigadier Saif Al Zari Al Shamsi, Commander-in-Chief of Sharjah Police, said: “Our participation in the ‘Strap them Safe’ initiative aligns with the implementation of the amendments to the Federal Traffic Law, where all drivers and passengers should now fasten their seatbelts while driving, with a fine of AED 400 and four penalty points for failure to comply. In addition, special car seats should be provided to children younger than four years of age, and a fine of AED 400 will be levied if any child younger than ten years of age or under the height of 145 cm sits in the front seat of the vehicle.”

For her part, Jawaher bint Abdullah Al Qasimi, Director of FUNN and Director of the Sharjah International Children’s Film Festival (SICFF), said: “We are delighted to participate in this initiative which aims to ensure the safety of all children. We have deployed the art of special effects to support the initiative, where a specialised team from ‘FUNN’ painted expressive imagery on children’s faces in two groups. The first group’s face-painting featured bruises and injuries indicating the consequences of not following safety procedures inside vehicles, while the second group’s face-painting featured signs of relaxation and safety for following proper safety procedures and fastening their seatbelts inside the vehicles.”

The Child Safety Campaign is an initiative launched by SCFA under the directives of the wife of His Highness the Ruler of Sharjah, Her Highness Sheikha Jawaher bint Mohammed Al Qasimi, Chairperson of SCFA. It seeks to promote awareness about children’s care, safety and social wellbeing in order to ensure they are physically and psychologically healthy in a happy and stable family environment.