The Child Safety Campaign (CSC), an initiative of the Supreme Council for Family Affairs (SCFA) in Sharjah, formed part of an official delegation from the emirate to Finland, with the aim of developing bilateral relations in healthcare, education, child safety, clean technology and digital solutions.

The official visit had been organised by the Department of Government Relations in Sharjah with the directives of His Highness Sheikh Dr Sultan bin Muhammad Al Qasimi, Member of the Supreme Council and Ruler of Sharjah.

The Campaign’s participation in the Sharjah Government delegation came in light of the immense support of Her Highness Sheikha Jawaher bint Mohammed Al Qasimi, wife of His Highness the Ruler of Sharjah and Chairperson of SCFA, to develop and showcase the campaign’s efforts on the international stage, where it held a series of meetings with a number of renowned child welfare organisations, including Save the Children in Finland and the Mannerheim League for Child Welfare.

Through the visit, representatives from the Child Safety Campaign sought to develop mutually beneficial partnerships with international organisations dedicated to child care and protection. It also aimed to share best practices for community awareness and children’s safety, as well as to explore ways of cooperation in the field of cyber safety for children and the safe use of social media sites in the Campaign’s future programmes.

CSC’s discussions with Save the Children Finland were conducted in the presence of Antti Jarventaus, Manager of Children and Digital Media at the organisation. They touched on best practices for child safety and protection, and learned about how to best benefit from the practical experiences and expertise of Save the Children to apply them during the Campaign’s upcoming programmes. The Sharjah delegation then presented a certificate and token of appreciation to the organisation’s members, inviting them to visit CSC’s headquarters in Sharjah to learn about and participate in the campaign’s programmes. 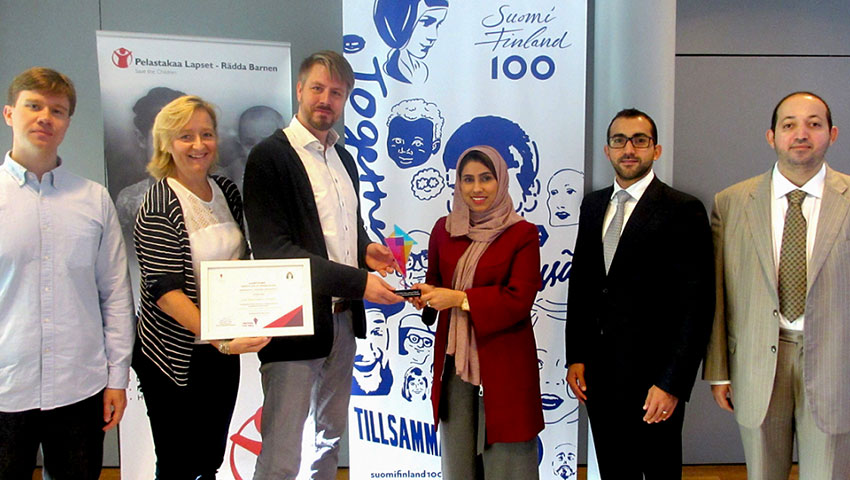 The second meeting saw the delegation sit down for talks with The Mannerheim League for Child Welfare, one of Finland’s oldest child care organisations. Founded in 1920 to find ways of improving children’s living conditions, the league has grown over the years to include hundreds of associations concerned with child care and safety from all over Finland.

During the meeting, Hanadi Saleh Al Yafei gave a presentation on the Child Safety Campaign’s efforts in the emirate, to Juuso Repo, Evaluation and Development Specialist at the league, and a number of the association’s representatives. They then discussed possible means of future collaboration to facilitate the exchange of expertise.

Sheikh Fahim bin Sultan Al Qasimi said: “The Sharjah Government’s visit to Finland is one of the steps that reflects the visions and directives of His Highness Sheikh Dr. Sultan bin Muhammad Al Qasimi, Member of the Supreme Council Ruler of Sharjah. The emirate seeks to reinforce relationships with different countries from around the world, open channels of communications and exchange expertise on an institutional level and developmental initiatives.”

He added: “We were delighted to be joined by the Child Safety Campaign for the visit, as their meetings with their Finnish peer organisations were a great opportunity to build effective international partnerships with agencies specialising in child care and protection. At the same time, it was an opportunity to showcase the campaign’s leading experience in terms of promoting its message and nurturing the abilities and knowledge of its staff.”

For his part, HE Saud Salem Al Mazrouei remarked: “In keeping with its objectives and visions, the Child Safety Campaign underscores the responsibility that each organisation in the government holds towards its own message. The campaign’s efforts contribute to ensuring the safety of future generations and this is why the Sharjah International Airport Free Zone, and the Hamriyah Free Zone Authority have renewed their strategic partnership with the campaign for the second consecutive year and adopted the fundamental underpinnings that raise awareness about children’s physical and psychological safety in the community.” 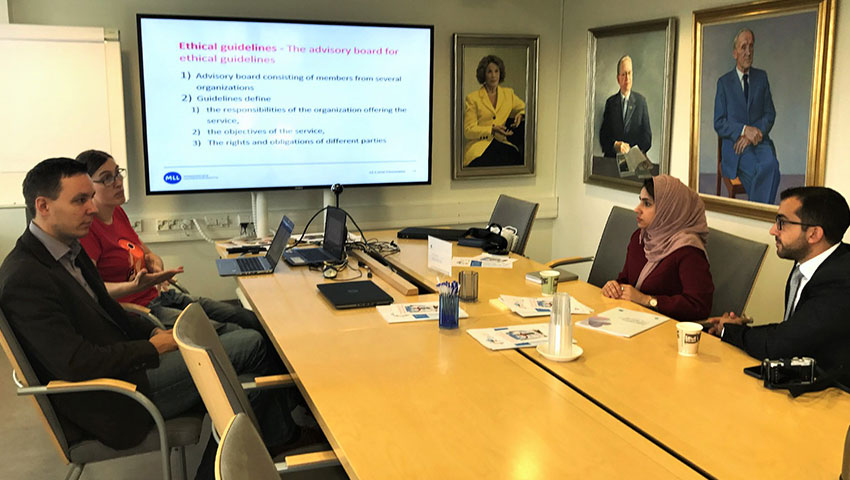 Hanadi Saleh Al Yafei said: “The participation of CSC within the Sharjah delegation’s visit to Finland demonstrates the immense support the campaign receives from Her Highness Sheikha Jawaher bint Mohammed Al Qasimi, and Her Highness’ belief in the campaign’s message and efforts. The visit proved to be extremely fruitful for us, as we became acquainted with the experiences of renowned international child protection organisations that boast a long history of work in the field. It was a great opportunity for us to open channels of communication with these organisations and to explore ways of enhancing joint action, sharing of expertise, and future international collaborations.”

The Child Safety Campaign – currently in its third edition – was launched in March 2017 under the slogan ‘Child Safety in Cyberspace.’ The campaign is aimed at children, parents, teachers and internet experts and seeks to highlight the vital role played by community organisations to protect children from social media hazards and ensure they maintain a safe presence online.

CSC was launched under the directives of Her Highness Sheikha Jawaher bint Mohammed Al Qasimi, Chairperson of the SCFA and wife of His Highness the Ruler of Sharjah. It works to promote awareness about children’s safety, protection, and social stability in order to ensure children are physically and psychologically healthy in a stable and secure family environment.